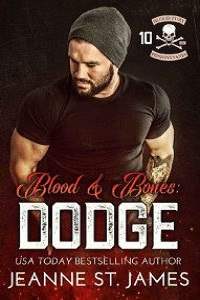 Songs mentioned in this book:

My Heart is Broken - Evanescence

Fade into You - Mazzy Star

His lungs were on fire.

An invisible knife stabbed him in the ribs.

He lengthened his stride, pushing through the pain and pushing himself harder.

His destination was clear.

His sneakers slapped the concrete as he sprinted down the sidewalk.

That fucking house. He knew he’d find her there.

He always found her there.

Stoned and passed out on the floor on a stained, filthy mattress. What used to be light colored fabric was now black and brown. And even dark red in some spots.

Tonight, her second-hand dress had been pulled up to her waist. Her legs and other places exposed. Places a son shouldn’t see on his mother.

Her eyes were closed, appearing asleep. Her mouth slack. A rubber tube still tied around her arm above her elbow.

“We’re only trying to help you!”

The cop who shouted that out was now wheezing.

Good. Maybe they’d give up soon.

Junkies propped in the corners of the crumbling, dark rooms. Along the hallway. On the stairs. All of them high. Some of them semi-awake, most of them not. Some of them maybe even dead.

He didn’t give a shit. She was the only junkie in that house that mattered to him.

He was only there to find the woman who was supposed to be responsible for him.

It wasn’t supposed to be the other way around.

He tried to hear his pursuers over his own strained panting and racing heart. To gauge how close they were.

They hadn’t given up yet.

He needed to lose them.

He darted left and down a dark alley.

Shit. He picked the wrong fucking one.

Headlights sliced across the narrow alley. He winced and shielded his eyes when a spotlight hit him directly in the face.

He swiveled his head back and forth, desperate to find an escape.

He wasn’t sure if his mom was dead. He never got a chance to check before the house was swarmed with men in uniform. But dead or not, the cops showing up at a crack house was never good.

Them chasing him was even worse.

A closed dumpster was pushed against one brick wall, but even if he climbed on top of it, he still couldn’t reach the roof of the two-story building.

He was trapped. With only one way out.

The way he came in.

He gritted his teeth and took off, right toward the cop car blocking the entrance and heading in his direction.

He screamed as loud as he could as he ran directly at it.

His sprinted as fast as he could but the vehicle was faster.

Worse, so much bigger.

Before he could dart out of its path, what felt like a brick wall knocked him off his feet. He fell backwards, his arms windmilling in a failed attempt to catch his balance.

All the air shot from his lungs as he struck the pavement hard. His brain rattled in his skull as it hit, too.

He closed his eyes and surrendered.

The fingers gripping his shoulder dug in deeper. A silent warning not to flee. But if he got the chance, he would.

He didn’t want to be here.

Not on that stoop.

Not with those people. Both the ones outside and inside.

One of the two cops flanking him jabbed his finger against the fancy doorbell again.

A few lock clicks were heard, then one side of the double doors opened, cool air from the air conditioning rushed out and a tall, thin blonde woman stood on the other side, looking down her nose at them.

The woman Dodge’s mother called Tricky Vickie for whatever reason. Dodge didn’t care why, he just knew the woman was his stepmother in name only.

With a pinched face, her gaze skimmed both cops, then dropped to Dodge, standing between them.

Her lips twisted and her eyes narrowed as she slowly raised her gaze from him back to one of the officers. “May I help you?”

Apparently, the invisible lemon she was sucking on became more bitter. “What’s this about?” Her words might as well have icicles hanging off each one.

“We’re looking for his father, ma’am.”

Dodge rolled his eyes. They were at the wrong house, then. The man who lived there never once acted like his father. The asshole who lived on and off with his mother was more of a father to him than the one at this address.