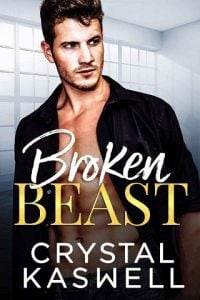 "I'm sorry, Mr. Pierce. I dug into every pocket of this asshole's life. And there's nothing I can use. Not officially."

"He has a vulnerability. A woman." He shows off an image on his cell.

A woman holding a sheer sheet to her chest.

Not one of Neil's grainy, long angle photos.

The work of an artist.

He scrolls to the next.

The same woman, standing at the window, in the glow of the morning sun.

Her hair swept over her shoulder.

Her head falling to one side.

Her bare back on display.

"She's hot, huh?" He chuckles, pleased with himself. "And even better from the front."

My stomach churns. I'm overcome with the urge to protect her. It's not like me.

After what happened with Bash, I gave up on protecting anyone.

"She goes by Beauty," he continues. "Broken Beauty, technically. There's plenty available publicly, but I can dig if you want more." He raises a brow. "You like her, huh?"

"I'll say." He chuckles. "She must have a hundred self-portraits on her site. More on social media. She's got the followers to match too. A few hundred thousand on Instagram. Two, three times that on her site."

There it is, a picture of her standing in front of a mirror, bathed in soft white light.

The image is well-composed.

The lighting is perfect.

I haven't wanted anyone in months, but I want her so badly I can taste it.

"How does she know Fitzgerald?" Is he a fan? Or is there more?

"He's obsessed with her. Shows up at the gallery where she works once a week to buy a new piece. Just to talk to her. Doesn't let on that he's seen her naked."

Mostly naked, but what's the difference?

"He hasn't crossed the line, but it's only a matter of time. I can put eyes on him. Set up a honey trap. Who knows? Maybe she's game to participate for the right price."

"No." It's not enough to put a dent in his marriage, career, image. I need to do better. "I have another idea."

A divorce will destroy his finances.

That will destroy him.

Rich people get whatever they want.

The second they hear no, they add another zero to their offer, and voila: the world is their oyster.

Here I am, sitting in the back of a black town car, two hours into a drive to a secluded mansion, babysitting a framed photograph.

It's not even an original painting.

But no, Adam Pierce can't stop by the gallery himself. He can't send an assistant (and a guy with this kind of cash is bound to have at least one assistant).

He asked the gallery to hand deliver the photo.

And since the owner can't be bothered with such a trivial task, he sent me.

Okay, maybe my boss didn't say gams. Maybe I added that. Maybe, in my head, my asshole boss sounds like an old-timey journalist.

Or one of those film noir detectives who loses everything to a dangerous woman with a great pair of gams.

Those movies are gorgeous. The black-and-white photography, the lingering close-ups, the cunning woman who destroys the man who underestimates her.

I close my eyes. Rest my head against the cool glass.

Courtesy of Adam Pierce. Not that I'm complaining. As much as I want to find fault with the reclusive billionaire, he paid handsomely.

A thousand dollars for home delivery.

And all to the courier.

Did he know a pretty girl in a short skirt would accompany his new art?

Or is he the kind of guy who takes care of the help?

The car turns onto a quiet street. For a mile, we're surrounded by woods, then a clearing, a rocky beach, a winding driveway.

A mansion straight out of an old movie.

Three stories, stone walls, gargoyles perched on the edge of the steep roof.

Hidden behind overgrown evergreens and a wrought iron gate.

An actual gate made of actual iron.

Did I fall asleep and wake up in a fairy tale?

After we park in the massive driveway, the driver helps me out of the car, opens the trunk, smiles as I remove the framed photograph.

We walk through the equally grand backyard—outdoor pool, enclosed pool, solarium, and all cliffside—then through the French doors, into the ballroom.

An actual ballroom, with a hardwood floor, high ceilings, crystal chandeliers. I have to stop myself from staring. I'm not here to contemplate the eccentricities of the rich.

I'm here to hang this photo and collect my commission.

I hold the frame carefully as we walk up the winding staircase and down the long hallway. All the way to a massive oak door.