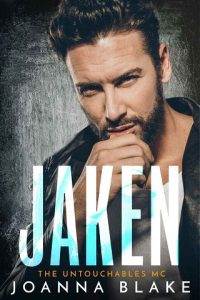 I smashed my fist into a face as my heel lifted and stomped down another of the bikers coming up behind me. The Hell Raisers were shouting something about ‘seeing her first’ as I pummeled them into the ground.

Hell no, they did not ‘see her first’. I’d been watching the petite brunette beauty all night. I hadn’t been able to take my eyes off her.

That was the only reason she was safe. I’d followed her outside. I’d seen her valiantly fight them off. And I’d stepped in to help when she needed assistance.

And then she’d kissed me. Kissed my cheek and just walked away. As if she wasn’t walking away with my heart.

I stood in the back garden of the hotel, wondering what the hell had just happened to me. I could still feel the girl’s incredibly soft lips on my cheek after her whispered “Thank you.” I could still smell her.

“Fuck me,” I growled. I hadn’t been interested in a woman in years. Not since I came to the States. And even back home in Ireland, it had been a passing interest. A general urge, not focused on any one woman in particular.

I didn’t like this feeling. Not one fucking bit. Particularly because the lady in question was far too good for the likes of me.

She probably had a boyfriend. Or worse yet, a husband. But it didn’t matter. I had a very strong feeling that I wouldn’t be able to stay away.

I could still see her fighting off her attackers, the disreputable Hell Raisers who’d crashed Hunter’s wedding. The bastards who had dared to touch her without permission. I had watched in awe as she fought back. Until I realized she didn’t stand a chance. Then I rushed in to save her.

And I lost my heart completely in the process.

I texted Mason and Cain to meet me outside. I rolled my eyes when Hunter, Vice, Trace, and Preacher followed them out of the hotel a few short minutes later. It was like that line from my favorite movie, Aliens. It ‘looked like a goddamn town meeting’. But with bikers, not colonists on a faraway world.

“Shouldn’t you be back at your wedding?”

“I’m about to disappear for the rest of the damned weekend. But I wanted to hear this,” Hunter said with a smirk. “I have a feeling I know what it’s about.”

I nodded to Mason’s question. Cain looked thoughtful. Trace already knew exactly what I was after.

“What do you want to know?”

He smirked at me and cracked his knuckles.

“I’m not leaving until I know she’s home safely.”

Cain tilted his head to the side.

“Following the girl home won’t be the best way to impress her at this juncture.”

“Don’t look at me.” Preacher cackled. “My old lady is pregnant. I need to rub her feet.”

“Yeah, right, I’m sure it is her feet you will be rubbing,” Vice said with an eye roll. He’d had his eye on Cynthia before Preacher locked her down. He still sounded a little bit envious.

“Get Doc,” Mason said slowly, considering one of the few Raisers we liked and respected. “He’s not too shitfaced. Yet.”

“On it,” Hunter said, turning to go inside. “He can’t say no to me on my wedding night.”

I relaxed a little, staring at my tribe of unlikely brothers.

“You got bit,” Cain said, cracking a smile. I was always amazed when he did that. The man looked like he was made of stone. It was fucking spooky.

“Drinks are on the house,” I grumbled.

He just smiled and shook his head. I followed him back inside, hoping for a glimpse of the girl again. I didn’t see her, but I knew she would be getting home safe tonight. I wasn’t leaving until I saw Doc ride off behind her car. A hatchback or something cute, I assumed.

I hugged the wall, keeping an eye out. Finally, she appeared. She looked around with a bright smile. I could tell her professional demeanor was a front, but a well-executed one. She was tired. She had to be.

After all, she’d just fought off three attackers. With a little help from me, of course. But she must be shaken up.

I wanted to know how she did that. How she kept going. Where she had learned to fight.