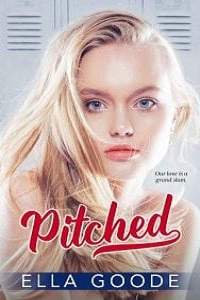 “Booker’s dad is going to hire strippers if we win regionals,” announces Dean. “Hitting it out of the park per usual!” The sound of palms striking palms fills the bus along with a chorus of excited cheers. I push out another deep, even breath.

Ethan peeps over the back of the seat. My eyes aren’t open but I imagine that his long, sandy blond bangs are obscuring his vision. “You hear what Dean said—Oh, never mind.” He slumps back into position. “Colt is sleeping.”

“Of course he is,” our shortstop, Tommy, snorts. Because I’ve played with some of these guys since Little League, I know he’s rolling his eyes and throwing his head to the side. “When is he not?”

“When he’s on the mound,” Ethan says. “But other than that, you’re right. I guess that just means more pussy for us.”

“It’s the same thing.” I can feel Ethan’s shrug.

“No. No one is going to sleep with you, Eth. You’re seventeen. They send people to jail for that.” Booker’s dad is a lawyer. He would know.

Tommy laughs and exchanges a high-five with Booker.

“Fuck you,” cries Ethan. “I had Frankie bent over the locker room benches last Saturday, and you all know it because Tommy walked in on us.”

“Don’t remind me. I’m trying to shut that image out of my head. Had nightmares that night,” Tommy says.

I have to turn my head further into my pillow to hide a smirk. Beside me, my catcher, Mick, slaps the side of my leg.

“Fuck you!” Ethan repeats. “It was fucking hot and you thought so too, or you would have left.”

“Frankie told me if I moved, she would take her art knife and slice my dick off. What was I going to do?”

“Didn’t know she was into the voyager shit,” Dean comments.

“It’s voyeurism,” Tommy corrects. “How is your dad a doctor and yet you’re illiterate?”

I bust out laughing because he’s so fucking funny even if it’s unintentional.

Tommy’s head pops up. “I knew you weren’t sleeping!”

“You fucking liar. You knew shit.” Dean swats the shortstop across the back of the head. The two start fighting until Coach Harvey stands up in the front of the bus and bellows for us to shut the hell up.

“I know. That’s why I couldn’t keep from laughing.” I shake my head. This team’s a bunch of meatheads, but I guess they’re my meatheads.

“You excited about the strippers?”

“Not really.” I rotate my shoulder. “Last time Booker’s dad set up a surprise like that one of the girls kept hanging on my pitching arm.”

“Oh right. During the Louisville tourney.”

“Thought I was going to have to ice myself down after it.” I wince at the memory. Maybe some guys, like Ethan, are into the group thing, but that doesn’t interest me. Girls don’t interest me in general. Like someone dancing on my dick isn’t going to make me a better pitcher. If anything, they’re a distraction. Ehtan played like shit during the afternoon game because he was thinking about how Frankie was waiting in the locker room for him. We won because Dean hit a three-run homer in the bottom of the seventh, and the other team couldn’t get a hit off me or our reliever, Logan. Tommy likes baseball, but he doesn’t love it—or, at least, he doesn’t love it more than he loves girls, Jaeger bombs, and collecting sneakers.

“There’s a new Nike drop on Friday,” he announces, waving his phone. He’s always glued to it post game since phones aren’t allowed in the dugouts.

The entire bus groans. Headphones get clamped on, and volumes on phones are raised. It’s not like the rest of us hate the shoe releases, but Tommy talks about them nonstop.

Mick lays a towel over his face. “You woke up at the wrong time.”

I grunt a reply and check my messages. There’s nothing there. I squeeze the phone tight and tell myself no news is good news. No news means my alcoholic mother hasn’t gotten herself in trouble. No news means she showed up to her night shift at the windmill company where she helps to attach the rubber fittings on the giant blades. No news means my brother, Tucker, age fifteen, is at home either gaming or doing his homework. I hope it’s his homework.

I stare at the blank screen, my fingers itching to type out a message. Tuck would not appreciate me checking up on him. He thinks I don’t trust him, and the problem is he’s right. He’s impulsive and hot-headed, and half the time I dread my phone ringing because it’s news he’s been in a fight. But the times I don’t get messages, my imagination goes into overdrive.