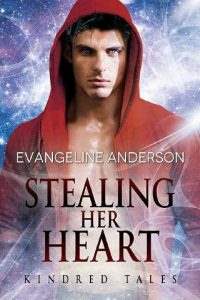 Victoria Erickson sat at the Last Call Bar nursing her third strawberry daiquiri and looking down at the rip in the skirt of her expensive Teri Jon dress. She had no idea how she had gotten it, but there it was, staring at her like a bad omen.

The Teri Jon was a sexy red wrap dress and Vicky had gotten it at Saks especially for tonight—for her Valentine’s date. It hadn’t been on sale, either. In fact, it had cost an ungodly amount—almost five hundred dollars—which she could ill afford on her high school teacher’s salary. But it had looked so good and made her feel so sexy, she’d decided to do something she normally wouldn’t—get the dress, wear it once, and then return it the next day.

No returning it now, whispered a little voice in the back of her head as she examined the rip. Nope, no way—absolutely not. You just blew your savings on something you couldn’t afford in the first place. Now what are you going to do the next time the Civic breaks down or the AC goes out?

Vicky didn’t have answers for those questions—all she knew was that she’d paid an awful lot to look nice and the effort had been completely wasted. Her date hadn’t even showed.

“Stupid app,” she muttered, staring resentfully down at her phone. “Should have known trying to start dating again at my age wouldn’t work.” Not after over twenty years of being with the same man, anyway.

It had been her older daughter Jodi’s idea to get her an account on Second Time Around, the premier dating app for divorced people in their forties and fifties.

“Dad’s moving on, Mom—you should too,” she’d said when Vicky had admitted to being lonely.

It had seemed like a good idea at the time. It had been almost a year since her youngest daughter, Melinda, had gone off to college and Vicky’s husband of twenty-six years had announced that he was leaving.

In fact, both events had happened on the very same day. Vicky had still had tears in her eyes from seeing her baby off to USF when Kevin had announced that he’d “had enough of this shit” and he was leaving immediately.

“He already had his bags packed,” Vicky murmured to herself, taking another sip of her daiquiri. “Couldn’t wait to get away.”

As it turned out, her ex had only been waiting until both kids were gone so he couldn’t be forced to pay any kind of child support. And it further turned out that he’d been having an affair with his secretary for the past three years. And to cap off the sad, stereotypical story of her husband’s infidelity, his secretary—who was now his new wife—was pregnant.

So Kevin was starting all over again while Vicky was just left there in the dust, middle aged and alone with no one to love her and no one left to love—at least, no one at home, since all her chicks had flown the nest.

Oh, stop being so maudlin, Vicky scolded herself mentally. You’re not usually like this—it must be the alcohol talking.

Well, that and the fact that she’d been stood up on Valentine’s Day. Which sucked—honestly, there was no way around it.

The worst thing was, Vicky was fairly certain she’d spotted Ted—the man she was supposed to meet—earlier in the crowded front of the bar. She’d seen a man who seemed to match his picture—well, sort of, since he was a lot shorter than the 6’2 he’d listed and had a beer belly and was balding. But all the same, he’d looked like the photo on the app.

Vicky had seen him looking—scanning the bar for the woman in the red dress. She’d felt so sexy earlier, messaging him with that little bit of information. “I’ll be the one with a silver streak in her hair and a low-cut red dress,” she’d typed and had felt a tingling between her thighs she hadn’t felt in years.

She and Kevin had been in a sexless marriage for the last five years together and tonight she’d imagined she might finally have a little fun for the first time in ages. So she had waved at Ted—or the man she thought was Ted—trying to catch his eye behind the thick glasses he wore.

Ted—if it had been Ted—had sized her up with a quick up and down glance, then turned and headed right back out of the bar. He hadn’t waved back, or come up to give any kind of explanation, or anything. He just left—as though what he saw when he looked at Vicky wasn’t enough to tempt him—wasn’t even enough to warrant any common courtesy.

Vicky had tried to tell herself it was the wrong guy, that it hadn’t been her date at all that she’d seen looking at her and leaving. But the minutes had ticked by and Ted never showed. He never even messaged her on the app to let her know he wasn’t coming or answered the short message she’d sent, asking if she was at the right place. (She knew she was—she’d double checked twice.)