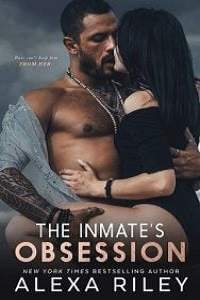 The metal gates are twice as wide as the SUV I’m sitting in and even taller than that. They’re covered with barbed wire on the top and sealed all the way to the cinder block wall. When they start to slide open I’m almost amazed they’re able to. They look heavy and scary as they grant us entry into the prison. I try and keep my expression blank, knowing my emotions often show too easily. My fingers itch to fidget with the seam of my dress, but I don’t give in. My dad always said it’s what gives me away when I’m nervous. How can I not be nervous? I’m a bundle of emotions all at once. Excited, sad, and even scared, which makes my heart heavy.

I haven’t only lost my dad behind bars, I’ve been placed in a prison too. The only difference is my prison is on an estate with a full staff that can get me anything I need at a moment's notice. My dad tells me there’s no reason to leave the estate because anything I could ever want is available to me. If only that were true. I’m never alone in that mansion, but I’ve never been lonelier.

Sitting in the back of the blacked-out SUV, I glance around at the four hulking men surrounding me. There’s one on each side and then two in the front. I’m sure there’s another vehicle following us, but it’s being discreet. My dad might be in prison, but he still somehow manages his men on both sides of the wall. Their loyalty to him is unbreakable.

Marco pulls the SUV around to the two double doors where visitors are supposed to enter. As soon as we come to a stop, all the men but him exit the car. A moment later they give me the all clear signal and I get out. When I’m out of the vehicle I stare up at the ominous building in front of me, hating that my dad is in there. He’s all I have left in this world, and he’s in a cage.

I reach up and touch the locket around my neck, and it gives me strength. Inside is a picture of me with my mom from so many years ago. We lost her when I was only four, and I often wonder if my memories of her are real. Sometimes I think I only have them because Dad always tells me stories about me and her together.

“This is as far as we can go, Sienna,” Tom says stiffly.

“Thank you,” I say automatically as I step forward.

I can sense the tension all around them, but I didn’t expect anything less. They aren’t happy that they can't come inside with me to be my shadow. They’ve all gotten so extreme with my safety since my dad went to prison. The only place I’m ever truly alone is my bedroom, and even then, there’s always someone right outside my door. It’s suffocating.

The double doors open for me, and I walk through. This is my third visit here, but I can only come as often as it’s allowed. I’m the one person my dad has on his approved list, and I’m not sure if it’s because he only wants to see me or because his men aren’t allowed in. I don’t ask because I know they won’t tell me the answer. Maybe one day I’ll get used to being in the dark.

“O’Neal,” the guard barks. “Back again to see your prison daddy.” He chuckles at his own stupid joke.

I don’t respond. Instead, I stand on the other side of the glass waiting for him to slip my paperwork through the slot to sign. He stares at me for a long moment, and I stare back. I’m not looking at him but focusing on something behind him to try and calm my anxiety. As much as I want some freedom, it scares the crap out of me too.

My dad is an underground king that can make people piss themselves when he walks into a room. I, however, get overwhelmed with anxiety when someone is only looking at me. Keeping me locked away at the estate doesn’t help me overcome it. It’s rare that I have to deal with someone that isn’t on his payroll, and because of that I don’t have much experience with someone being a jerk to me.

“Still a snotty bitch, I see.” He pushes the papers towards me.

I grab the pen and scribble my name down. A few other guards linger behind him, and I wonder if he’ll be here the next time I come. I’m sure there are several people in here on my dad’s payroll. If either of the guards watching happen to work for my dad, he’ll be lucky if he gets to keep his tongue.